For parents who feel like they’re failing to make sure their kids get enough sleep, this may be comforting: Your parents also failed, as did your grandparents and great-grandparents.

A new study shows that kids get about half an hour less sleep than than recommended, the same deficit as a century ago, even though the recommended amounts have changed over that time. Andrea Petersen explains on Lunch Break.

At least that’s according to a study released Monday in the journal Pediatrics, which found that children haven’t been getting the recommended hours of shuteye for at least a century.

The study looked at 32 sets of recommendations from the years 1897 to 2009. The researchers then gathered data on actual sleep time from roughly the same time period.

The amount of sleep recommended slid by less than a minute—0.71 minute—a year. On average, children actually slept 0.73 minute less every year. In general, kids in all time periods slept 37 minutes less than recommended.

Modern recommendations came from Harvard Medical School and the National Sleep Foundation, among others. The early recommendations were gleaned from sources including a parenting guidebook published in 1916. 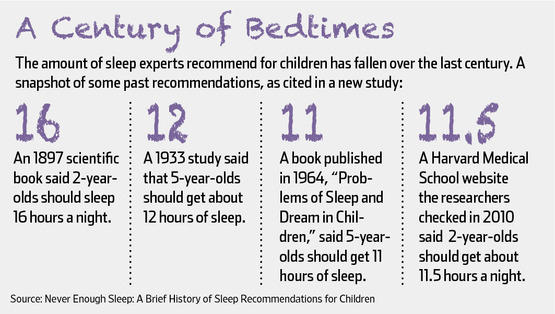 The researchers said no sleep recommendations were made during a chunk of the late 20th century: Recommendations analyzed are from before 1965 and after 2000.

Children sleep about 70 minutes less than they did a century ago. Recommendations, meanwhile, have fallen by a similar amount, according to the study.

As for why children aren’t getting enough sleep, present-day experts mostly point to the same culprit as their early 20th century counterparts, according to the study: the lure of modern technology. “In the early 1900s, people used to blame

[kids’ lack of sleep] on the radio and school books. Now it is TV and the Internet,” said Lisa Anne Matricciani, lead author of the study and a graduate student in the School of Health Sciences at the University of South Australia in Adelaide.

Some researchers state that almost none of the earlier sleep recommendations were backed by scientific studies. “After 100 years, we still don’t have meaningful evidence for these recommendations,” Ms. Matricciani said.

However, studies show a chronic lack of sleep raises the risk of obesity, diabetes and heart disease.

“The recommendations that we make now are much more reflective of actual data,” said Judith A. Owens, director of sleep medicine at Children’s National Medical Center in Washington, D.C.

Dr. Owens said modern recommendations are informed by studies that have manipulated the amount of sleep children get and measured outcomes such as attention span and mood and behavioral changes.

Technology isn’t just keeping kids from adhering to their bedtime. It’s waking them up in the middle of the night, too. The 2011 Sleep in America poll found that 18% of teens ages 13 to 18 are woken up by phone calls, texts or emails on their cellphones at least a few nights a week.

The new study comes amid a growing awareness about the negative health effects of a lack of sleep among children. In recent years, studies have linked children’s sleep problems with obesity, aggressive behavior and learning and memory issues. Children with sleep problems are also more likely to later suffer from depression and anxiety disorders and to abuse alcohol and drugs than children without sleep problems.